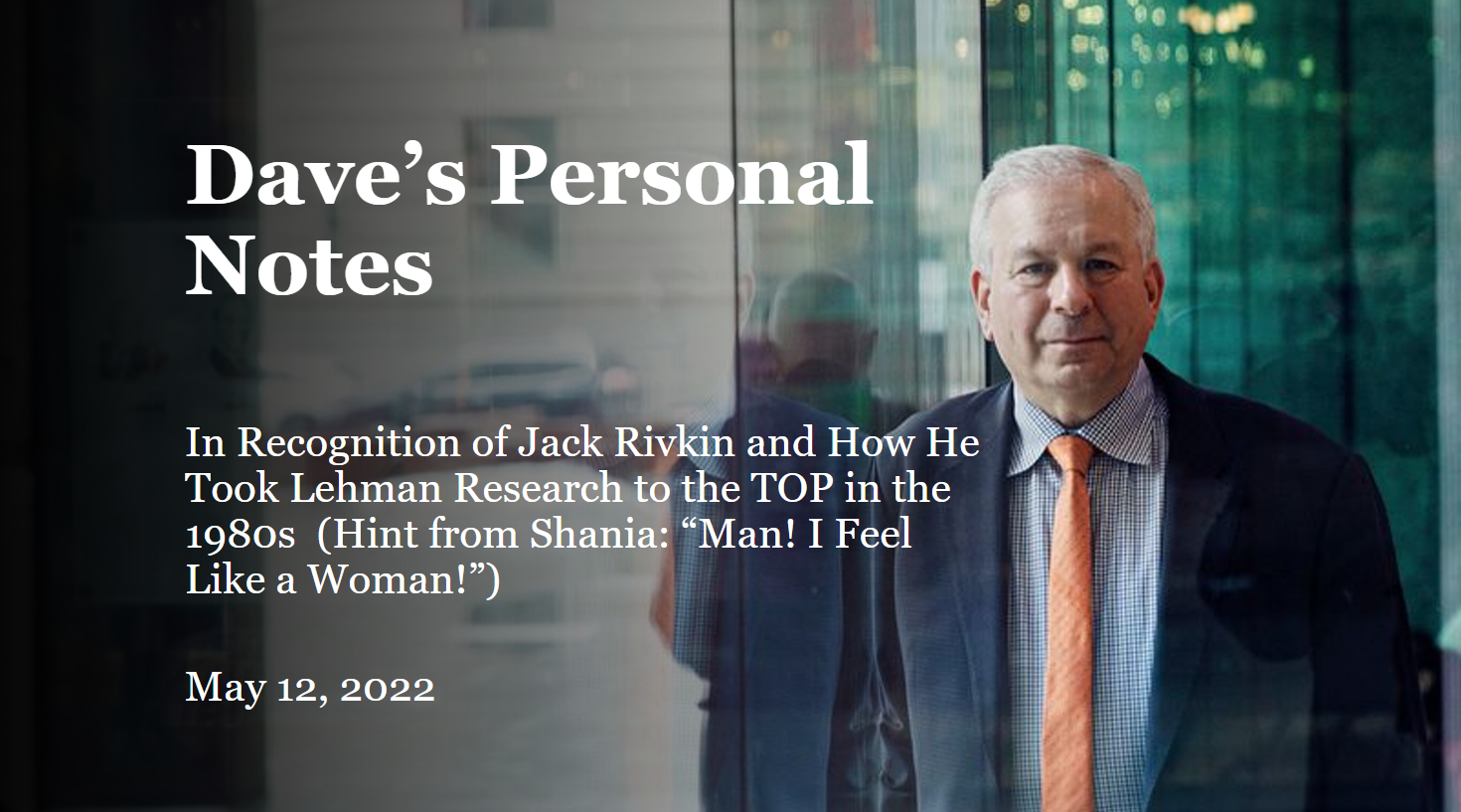 In Recognition of Jack Rivkin and How He Took Lehman Research to the TOP in the 1980s (Hint from Shania: “Man! I Feel Like a Woman!”)

Those who knew the Wall Street legend, Jack Rivkin, will surely appreciate my sentiment that this is someone deserving of a monument or a plaque somewhere – anywhere – for how he radically transformed the investment industry in the 1980s from being a male-dominated sector to a business where women were finally recognized for their talent, efforts, and achievements. This isn’t to say that there are still not wage gaps in existence today – which need to be resolved – but 40 years ago, women in the financial industry were to be seen, and not heard, and Jack single-handily attacked and addressed the prejudices of the day. He blazed a trail that few are aware of, but this missive will give credit where credit is due.

Jack was already a well-known and successful financial market executive by the time he accepted a position at Shearson Lehman in 1987 (the same year I started my career as a Street economist) as head of the firm’s fledgling Research department. And even that is being charitable, as Lehman’s Research area was at the bottom of the industry rankings for many years and was not to be taken seriously. Jack changed all that and implemented strategic improvements that took Shearson Lehman Brothers from a lowly ranking of 15th in the Institutional Investor survey in 1987 when he took on the role, to 7th in 1988, 4th in 1989, and then to the number-one spot in 1990 (two years ahead of schedule), where the firm stayed for many more years under his leadership.

Jack brought discipline and numerical targets to his new team – his innovative ideas like quantitative metrics included tracking analysts’ rankings, client calls (a minimum 125 per month), research reports, client inquiries, client visits, and tracked commission revenues that each analyst generated.  He immediately recognized that among research analysts, EQ mattered at least as much as IQ, and his implementation of the fabled “no jerk” policy paid dividends from the start. Transparency, accountability, compensation based on teams-man-ship (read: teams-woman-ship), mentoring, and meritocracy quickly became the norm in a department noted for its cozy and, dare I say, lazy culture.

But one crucial thing that Jack Rivkin did, which was considered radical at the time, was he promoted women to leadership positions within Research. It is the first thing he did, in fact – helping to eliminate the stifling effects of “gender-biased” management. He interviewed every single member of the Research department when he joined Lehman and figured out pretty quickly that the brightest and hungriest women on staff were practically made to be invisible. That all changed in a hurry; lead male analysts who were obviously in their roles because they were men and had number-two or number-three members on their teams who were females and clearly more talented and hard-working, were packaged out.  And the yet-to-be-discovered female research analysts were quickly promoted into the lead roles.  In fact, Jack already had the experience in knowing what women in this alpha-male industry brought to the table, because when he led the team at Paine Webber, he had already promoted Margo Alexander to Research Director, which was an unheard-of move at the time.

So, what happened at Lehman was that he immediately instituted a “women-friendly environment” – and only because he understood that this male-oriented industry totally lacked the diversity that today we all take for granted. That diversity is essential for success in any endeavor (Jack also realized this when it came to hiring and promoting people of various ethnicities). Diversity: a term you hear so often today at human resource seminars, was a crucial part of Jack’s lexicon when it wasn’t even on the radar screen, especially in the investment industry (go back and watch “Wall Street” and see how many women are on the trading floor as Bud Fox is espousing the virtues of BlueStar Airlines). What Jack found with the “gender from Venus” was not only a unique lens towards problem-solving, but that women in a “man’s world” working in this industry were hungrier, more dedicated, motivated, and hard-working than their male counterparts, because, let’s face it, they simply had (and still today have) something to prove.

It was not just pure coincidence when Lehman ranked #1 in the Institutional Investor rankings by 1990, that 30% of the firm’s Research Department were women (double the industry norm at the time), and 40% of the top-ranked analysts were female – which was triple the standard for the rest of Wall Street. The proof of the pudding is in the eating. Jack loaded up his department with female research analysts and the next thing you know, his group is top ranked and stayed that way for years – at least until the rest of the Street caught up to such a “radical” idea that women are more driven than men, as a generalization, and probably a lot smarter too (I’m fairly convinced of that).

Now, I knew Jack from my days as the Chief Economist at Merrill Lynch after I made the move from Toronto to New York.  We met in 2003 when he had already moved on to become CIO of the iconic fund manager Neuberger Berman and through the outstanding Merrill Lynch institutional equity salesperson, George Stephenson, Jack, and I became rather close. There was never a meeting I gave to his group that he missed and the three of us had breakfast together once a quarter for nearly seven years. Add him to the list of mentors in my life – and in this case, not just professional but personal.

I am digging deep into my memory bank, but I think that it was some time in 2005 that Candace Browning, who was and still is the head of global research at Bank of America Merrill Lynch (a woman!), held a leadership symposium at one of the hotels in Midtown.  All the heads of the various research units were at this conference, and part of the agenda involved Candace giving each one of us a different Harvard case book study on “leadership.”  We were all instructed to read the case thoroughly and deliver an hour-long dissertation on the findings and our interpretation.  Candace did me the greatest favor in the world and gave me Jack’s case study – thing is, I had no clue about what he had accomplished at Shearson Lehman so many years prior, let alone that it was documented in the Harvard Business Review. I devoured the entire report, and it has stuck with me ever since. When I saw him next to George during breakfast a few months later, I told Jack about the effect that his experience had on me, but also asked why he never told me about how he pioneered the “women-friendly environment” in the financial industry. I still remember his grin and shrug of the shoulders as he responded: “I don’t like to talk about myself,” which reminded me that one of the characteristics he constantly sought on his research team was humility.

I can’t recall if I ever thanked Candace for choosing me to lead the discussion on Jack Rivkin so many years ago at that leadership conference, and I don’t know if I ever thanked George (we are still good pals) enough for being the first to make the introduction and for helping nurture what was a terrific relationship that lasted from 2003 to the day that Jack passed away from pancreatic cancer, in November 2016, at the too-young age of 76.  Even after I left Wall Street and Jack took on other endeavors, including a stint with my friends who ran Altegris, we would frequently meet up for one of those “macro/market” idea dinners hosted by Danielle DiMartino and Josh Frankel, not to mention as fishing partners at Camp Kotok in early August. I could never hide my admiration for him, and I consider that Harvard business school case study as a turning point for me in my respect for him as a visionary.

I have been assembling and leading teams since the time I first met Jack Rivkin nearly two decades ago, and I am proud of their success. And I can say that I long ago recognized the importance of having a strong contingent of women with senior roles. I am not sure I would have realized the importance to nearly the same extent without the benefit of learning from Jack’s experience.  When I look back on my own background, I can see that between my spells at Merrill Lynch and Gluskin Sheff, the women who had worked for me have gone on to have stellar careers: Chief Economist of SAC, Senior Advisor at the Bank of Canada, Senior Economist at the Oxford Group, and on the asset mix committee at the Abu Dhabi sovereign wealth fund. And it goes without saying, and not take anything away from the males on staff, that Rosenberg Research is following in Jack Rivkin’ footsteps — with several female stars on the team! 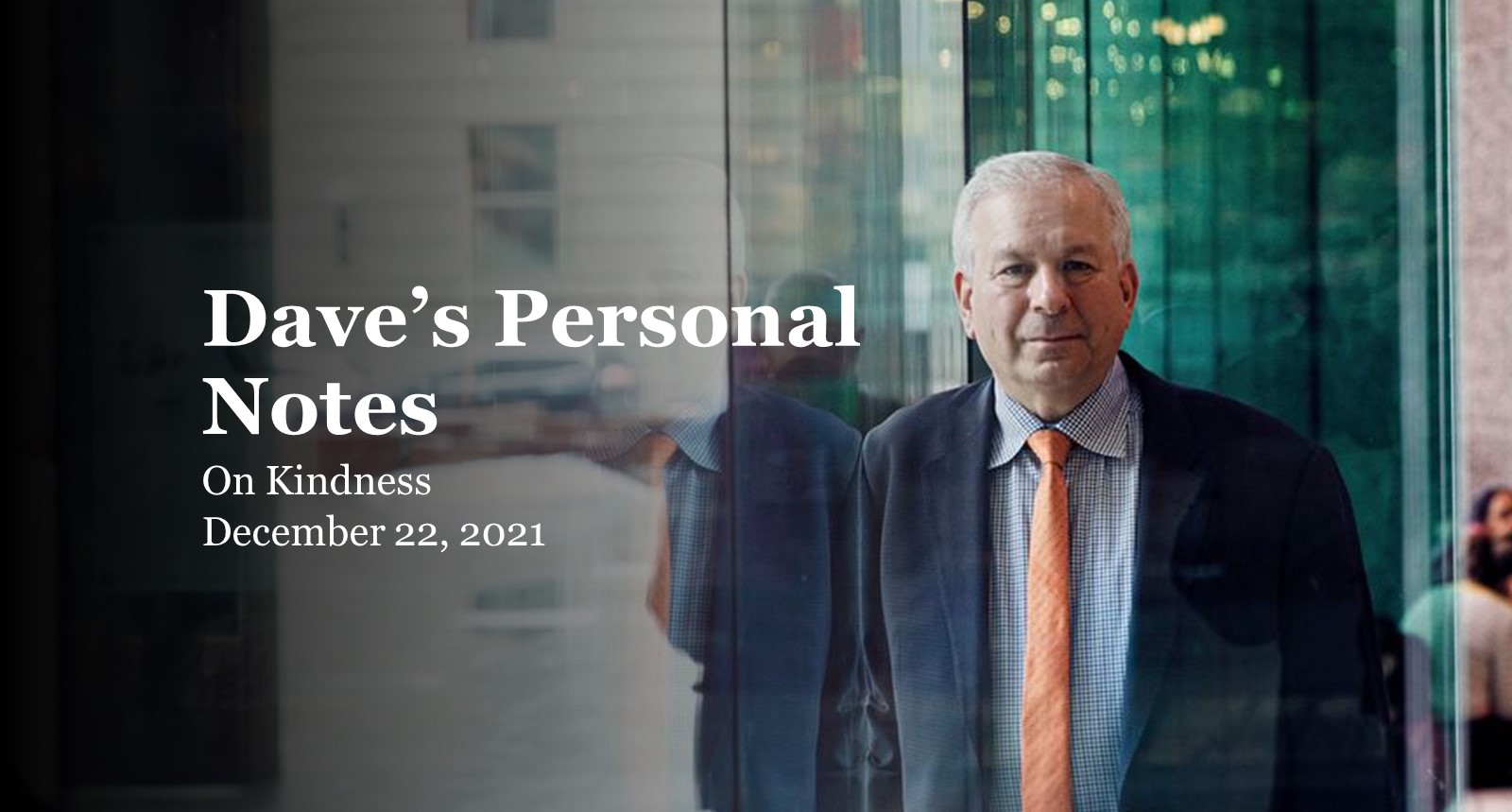 This was a rough year for everything outside the equity market and I say good riddance to 2021 just as...

Markets Have Yet to Price In Recession, We Could See Them Going Down Another 20%: David Rosenberg 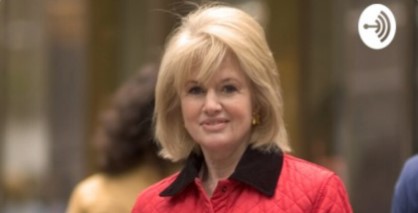